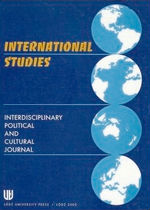 Summary/Abstract: The paper deals with the formation of a new national identity in Belarus under conditions of post-Soviet transformation. Under the term of “national identity” the author means the identity of the population of the Republic of Belarus that will be adequate to its status of a newly independent state acquired after 1991. Special attention is paid to the existing major research approaches to the problem of constructing this national identity. According to the author’s view, both major approaches are inadequate; the author puts forward a new (third) approach that goes beyond discussions on language and national culture, and corresponds to the concept of plurality of identities. The author describes some paradoxes of national identity based on the oppositionof “nation” and “people”. These correspond to the Western model of the“creation of modern nations”, which is not fully applicable to post-Soviet Belarus. All attempts to apply this model to contemporary Belarus lead scholars to several “cultural paradoxes” that can, however, be explained within a new approach.