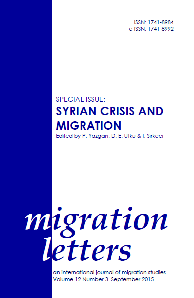 Summary/Abstract: From the mid-1950s through the mid-1980s, migration between Mexico and the United States constituted a stable system whose contours were shaped by social and economic conditions well-theorized by prevailing models of migration. It evolved as a mostly circular movement of male workers going to a handful of U.S. states in response to changing conditions of labour supply and demand north and south of the border, relative wages prevailing in each nation, market failures and structural economic changes in Mexico, and the expansion of migrant networks following processes specified by neoclassical economics, segmented labour market theory, the new economics of labour migration, social capital theory, world systems theory, and theoretical models of state behaviour. After 1986, however, the migration system was radically transformed, with the net rate of migration increasing sharply as movement shifted from a circular flow of male workers going a limited set of destinations to a nationwide population of settled families. This transformation stemmed from a dynamic process that occurred in the public arena to bring about an unprecedented militarization of the Mexico-U.S. border, and not because of shifts in social, economic, or political factors specified in prevailing theories. In this paper I draw on earlier work to describe that dynamic process and demonstrate its consequences, underscoring the need for greater theoretical attention to the self-interested actions of politicians, pundits, and bureaucrats who benefit from the social construction and political manufacture of immigration crises when none really exist.