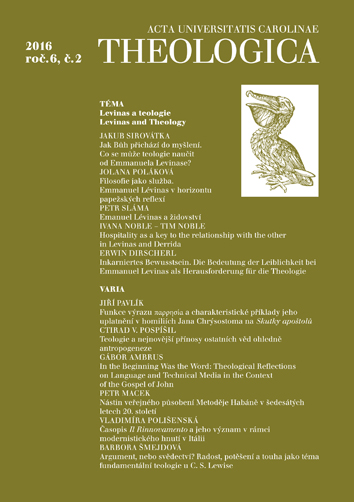 Summary/Abstract: This article looks at the theme of hospitality with a focus on the work of two twentieth-century French philosophers, Emmanuel Levinas and Jacques Derrida. It begins with a presentation of some of Levinas’ Jewish writings relevant to the theme. These writings display Levinas’ understanding of the nature of freedom in regard to the other, who holds me hostage. Yet, the article argues, this leaves Levinas still to some extent bound by the I, even the I as hostage. The dilemma is further investigated with reference to Jacques Derrida, starting with his own reflections on Levinas. The article then outlines Derrida’s own ideas on hospitality, asking how to reconcile the impossible demands of pure hospitality with the conditional forms it takes in our societies. The conclusion asks what the two writers have to say to European societies in their current encounters with refugees and migrants.