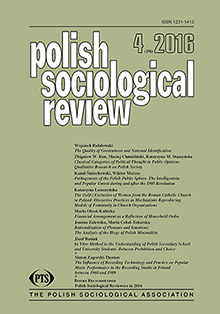 Summary/Abstract: In this paper we analyze the nascent years of the Polish public sphere during the years before and after the 1905 Revolution. We assert that it was a moment of clash between, on the one hand, the intelligentsia and its de facto bourgeois vision of politics, and on the other a rising proletarian counter-public. The popular unrest initiated a massive upsurge of workers into the process of mass politics. As we argue, this situation shocked the elites, attached to their utopian vision of the Polish people, “enlightened” from above by the intelligentsia. Consequently, their reaction was ambivalent, if not reluctant. The intelligentsia’s attitude was growingly tainted with a conservative fear of the masses, which inhibited the development of plebeian constituencies and forms of political articulation. This posed a cornerstone for the future layering of the public sphere, leading to what we call its pathogenesis. It produced outcomes lasting for years, as well as a general contempt towards democratic demands resulting in the impossibility of collective bargaining about popular economic interests.