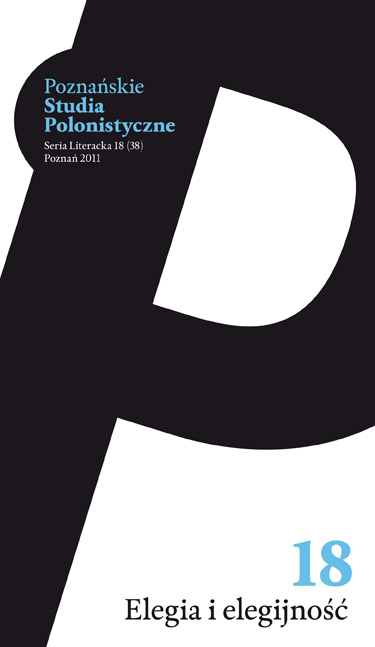 Summary/Abstract: This article explores the relationships and correlations between early Greek elegy (7th—5th c. BC) and the elegiac mood of a poem understood today as a nostalgic and melancholic attitude of the subject evoked in a poem. The known surviving ancient texts prove the thematic heterogeneity of the elegiac genre at its early stage of development, while this elegiac emotionality is by no means a distinctive feature of this particular poetical category within the archaic parental context even though it does occur in some works composed in distichs that are traditionally labeled as elegiac (e.g. works of Archilochus and Mimnermus). Elegiac attitude, within modern understanding of the term, is also to be fundin the melic poetry of early Greek poets (such as Sappho, Anacreon and Simonides of Ceos) which were, in fact, considered by ancient theoreticians as non elegiac as far as their genre was concerned. The attribution of the elegiac character, not linked genetically with any of genres, to one poetical category is thus a result of multilayered processes of cultural interaction and the reception of the early Greek literature rather than the substance of the genre.