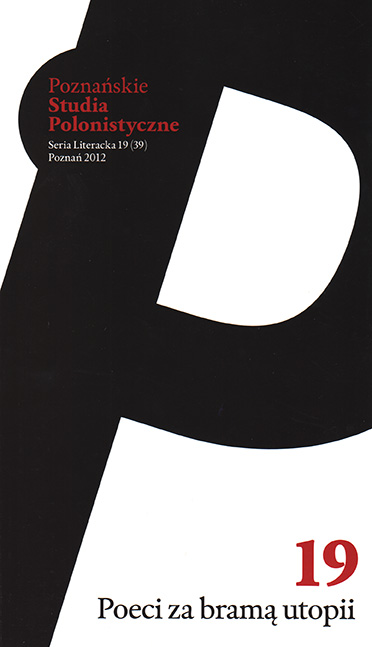 Summary/Abstract: The article attempts to reveal a reconstruction of Piotr Chmielowski’s critical thought regarding the poetical works written by Adam Asnyk (pen-name E...ly). The starting point for the discussion is a set of variations for different editions of Zarys literatury polskiej as well as other works of the critic elucidating the specificity, importance and the character of the poetry of E…ly. The article attempts to show why it was just the figure of the poet that was necessary and constituted a model figure for revealing the attempts of saving continuance of not only Polish poetry but also national culture and heritage. In his critical reflection, Chmielowski tries to find continuity between the Romantic paradigm and the post-January insurgency paradigm that was to define the obligations and the status of poetry, as well as to identify, uphold important question for Chmielowski himself as to why it was necessary to find among the generation of post-insurgency Poles a figure that would resemble Ignacy Kraszewski, a man-institution, and thus provide an exemplary model, necessary and much needed model figure in upholding and maintaining national consciousness and in preserving continuity. It is the culture and literature of the latter half of the nineteenth century that Chmielowski investigates in search of poetry and the poet as an icon of the nineteenth centuryness and modernity in the post-January insurgency non-poetical times. Asnyk can be seen, in Chmielowski’s terms, as an icon of the modern poet, a keystone figure who straddled the line between what can be consolidated and what was left to be saved in order to preserve the paradigm of Romantic poeticalness and the necessity for adjusting to new cultural circumstances and contemporary expectations on the part of receivers.