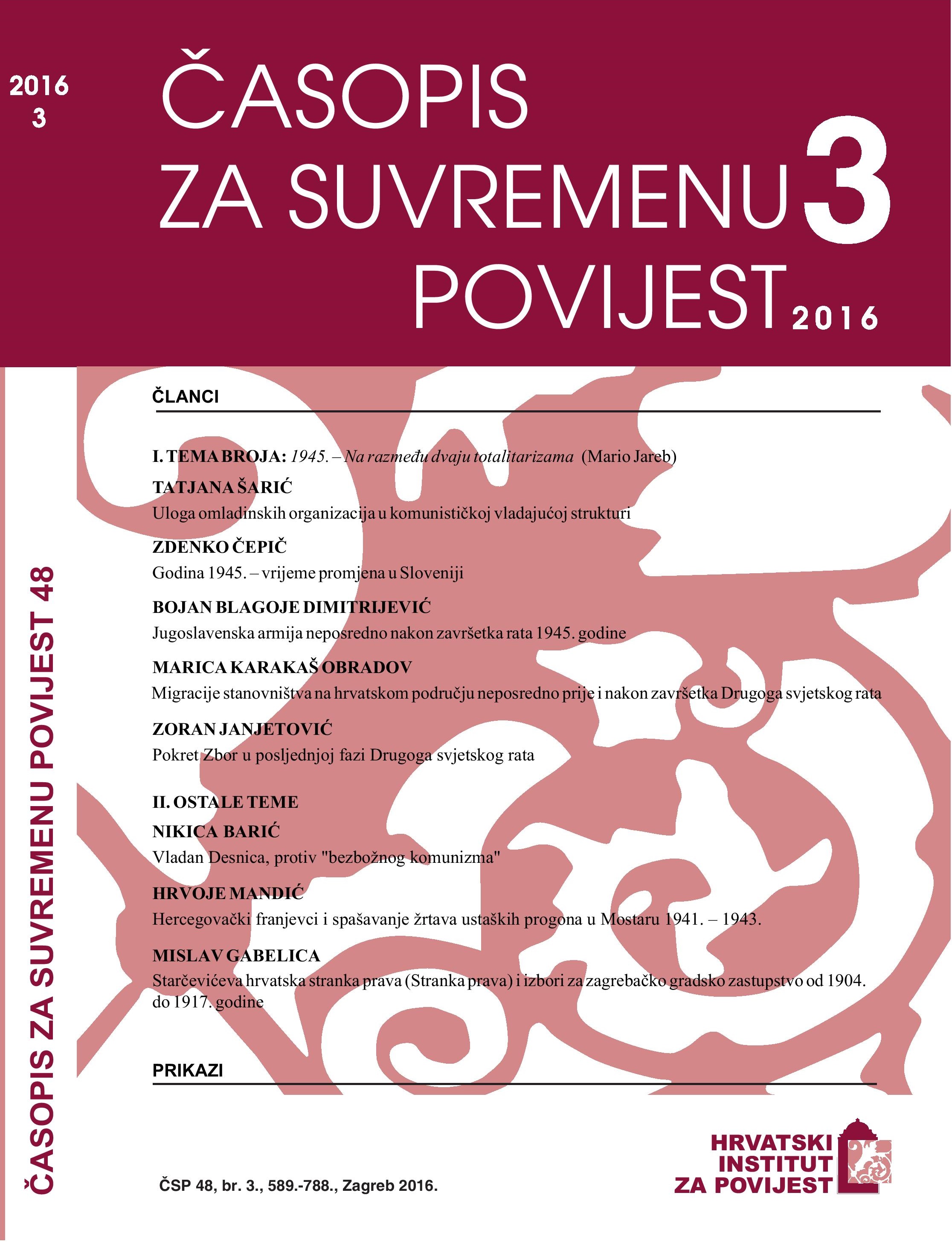 Summary/Abstract: The topic of this paper is the role of youth organisations, the League of Communist Youth of Yugoslavia (Savez komunističke omladine Jugoslavije – SKOJ) and the United League of Anti-Fascist Youth of Croatia (Ujedinjeni savez antifašističke omladine Hrvatske – USAOH), from 1946 known as the People’s Youth of Croatia (Narodna omladina Hrvatske – NOH), in the communist power structure of the Federal State (later People’s Republic) of Croatia during the first few years after the end of World War II. These organisations represented the youth wing of the Communist Party (Komunistička partija – KP) and acted as its transmitters in various tasks that needed to be carried out. The SKOJ was the Communist Party’s main ally and support when it came to organising the new order in the country; their modes of operation and organisation were almost identical in the period immediately after the war. Just like the KP, the SKOJ was a closed and relatively tight organisation. It operated simultaneously with the USAOJ (from 1946 the NOJ), a much broader organisation that was under its control. Due to the similarities in their programmes and tasks – both were responsible for fulfilling the KP’s directives – the two organisations were merged following a decision by the Politburo of the Central Committee of the Communist Party of Yugoslavia in 1948. The resulting organisation was named the People’s Youth of Croatia. This paper doesn’t follow all the processes in which the youth organisations were involved, instead focusing on their efforts to suppress the regime’s opponents in its goal to win over the youth – primarily the Catholic Church – as well as their actions against opposition among the school and university youth. The SKOJ and NOH put particular emphasis on reducing the influence of the Catholic Church, the strongest opponent of the regime, on the country’s youth, while the Church sought to preserve this influence through various means. The Church gathered the youth at religious services and ceremonies, religious education classes, Catholic organisations, and various educational and entertainment activities, which the NOH opposed through ideological upbringing. This took the form of debate clubs in school, science groups, studies involving subjects that directly negate religion, setting up work organisations in rural areas, and especially youth work actions. The SKOJ and NOH acted harshly against anyone at schools or the University who openly opposed the ruling elite – such students were often expelled from their institutions. Upon taking control of the University, the Party and state leadership mandated the “purging” of the regime’s opponents and the forming of the University as the centre of higher education for new “people’s” professionals – the new socialist intelligentsia. The purges were conducted by the youth organisations under the supervision of the KP and had a strong negative effect on the future of those youths who weren’t supportive towards the regime.