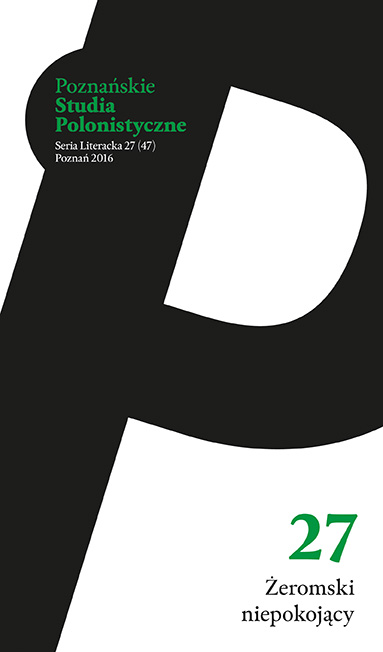 Summary/Abstract: Until now, Stanisław Żeromski’s writings have not been viewed with regard to literature common to the age of anxiety from the turn of the eighties and nineties of the 19th century, though there are numerous common aspects shared by both. These are clearly discernible in the early works of the writer, written in his youthful days, and shaped among others by J. Ochorowicz’s literary piece Z dziennika psychologa (“From a psychologist’s diary”) concerning the latter’s views on the neuropsychological system of man, the acquired habitual self-analysis and autobiographism rooted in the practical activities of a diarist; all of which surface both in the subject matter, the singularity of style, narration, as well as the composition of later works by the author. By devoting the majority of space and attention to identifying and tracing literary awareness in his intimate notes from 1882 to 1891 – of which one volume carries the title Dziennik człowieka nerwowego (“Diary of the anxious man”) – R. Okulicz-Kozaryn portrays its role in Siłaczka (“The Strongwoman”), Mogiła (“The Grave”) and Źródło (“The Source”), also in Ludzie bezdomni (“The Homeless”). He further claims that Żeromski’s Dzienniki (“Diaries”) should be presented as its laboratory sample, whereas the entire literary output of the writer ought to be interpreted as more advanced consequences of the then initiated experiment.