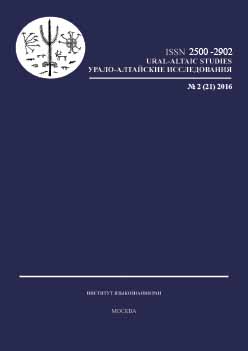 Summary/Abstract: The material the article is based on was collected by N.L. Fedotova in 2009-2010 in the Parabel village from two speakers of the Narym dialect of the Selkup language – Irina Anatolyevna Korobeynikova and Yakov Yakovlevitch Martynov. In 2009 a word-list of indigenous vocabulary and some paradigms were collected from both informants (the latter as much as they could remember, which they did with difficulty). In 2010 the full dictionary (about 2000 lexical items) was collected from I.A. Korobeynikova, who speaks the language somewhat better. The article presents the analysis of the vowels of the first syllable in the Narym dialect of the Selkup language on the basis of field recordings and their parallels in the Taz and Ket dialects. Qualitative oppositions in the vocalism system are described, using the results of the analysis in a phonetic software Praat, which gives to the transcriptions the base of formant analysis, not the one of the author's intuition. The results of the analysis allow to clarify the system of Selkup bases cited in [Alatalo 2004] and reconstruct four additional Protoselkup phonemes — *e, *ä, *y, *˱i. It is shown that specific Taz phonemes е — е (broad) и ε (lax) — and two i — i (broad) and i͔ (regular) can be recounstructed for the Proto-Selkup language and, as such, should be accounted for during the analysis of the development from Proto-Samoyed system to the Proto-Selkup one.