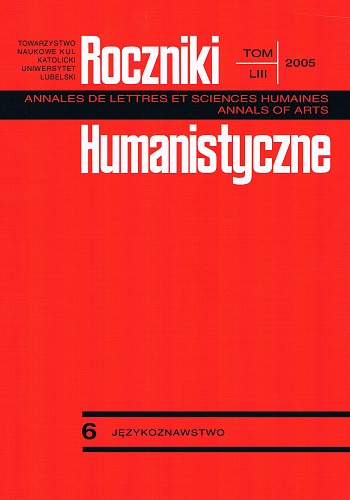 Summary/Abstract: The analysis in this paper is based on the ethnic names of the places situated in the area of the historical Lvov region that constitute ca. 13 per cent of the overall onomastics. Among the ethnic names from the ancient Lvov region the following semantic groups have been distinguished: the names defining inhabitants with respect to their field properties, names indicating the origin of inhabitants from a concrete place, the names most often of a przezwiskowe character, indicating people’s psychical and physical traits, names indicat¬ing the national origin of their inhabitants (the so-called tribal names). The ethnic names from the territory of the historical Lvov region manifest some peculiarities: in reference to the surrounding lands they constitute a relatively large group; the presence of the ending -ynie (eight names, e.g. Nahorynie); the prevalence of names formed by means of the formant -(ań // -yń)ce – 53. Polish names in the toponimic system of the Lvov region result, above all, from an energetic Polish colonisation action conducted mainly from the second half of the 14th c. until the end of the 16th. The above overview showed 89 (61.3%) names bearing Ukrainian traits (Old-Russian or Ukrainian), 20 (13.7%) Polish names and 35 (24.1%) names interpreted as forms with Polish or Ukrainian traits and 1 (0.6%) un¬recognised as to their linguistic genesis. The best definition for the description of the areas where Polish names were frequent in the territory of the historical Lvov region would be their considerable dis¬persion. The number of ethnic names of Ukrainian traits is clearly increasing from the West to the East, see their density in the Złoczów, Żydaczów, and Przemyśl regions. More com¬plete data will be provided by a list of all semantic and formal types.