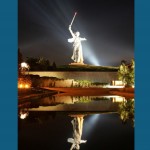 Summary/Abstract: The article deals with the role of the symbol of the Motherland in the contemporary Russian Anti- Americanism. The author characterizes reasons, forms, and resources of Anti-Americanism, including cultural and semiotic resources. The materials of the research consist of the results of interview as well as the discussion on the monument «The Motherland Calls!» (April – May 2015) in Russia. The author points out that not only the maternal symbol of Russia but also Russians’ treatment of their own country as «Mother Russia» are interpreted as specific characteristics of Russian culture, diacritics, and thus serve as important parts of the Russian national identity. In contemporary Russia the maternal symbol of the country is involved in practices of legitimation of anti-American attitudes and contributes to actualization of most characteristic which form the negative stereotype of Americans.