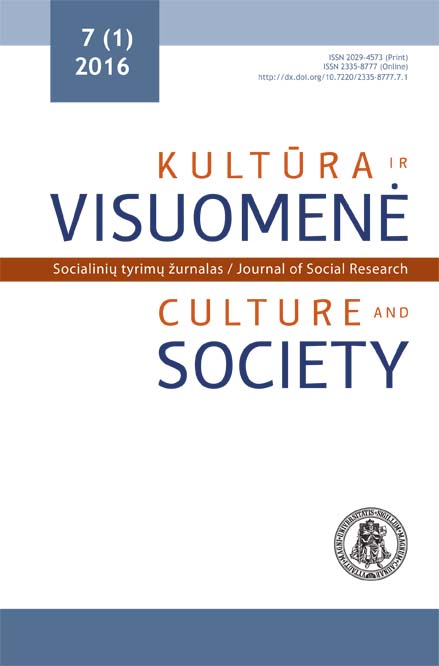 Summary/Abstract: Lithuania’s membership in the EU, and various changes such as an increase in women’s employment, changing both traditional gender roles and attitudes to gender equality, legitimised and institutionally supported promotion forms of gender equality, unfortunately, do not give a positive impetus. On the contrary, we have to admit the increasing gender gap in Lithuania. According to the Gender Equality Index 2015 created and calculated by EIGE, in 2005, 2010 and 2012, the gender asymmetry in Lithuania grew, when the average gender equality throughout the European Union increased. The negative trend has been recorded in four of the six key domains: work, knowledge, time, and power, while positive – in other two domains, namely, money and health. According to the Gender Equality Index 2015, the biggest gap between Lithuania and the EU average is visible in the domains of time, power, and money. One of the main reasons for this gap is a double burden of employment and the unequal distribution of family responsibilities women are facing. More effective measures of men’s involvement in family life and a well-developed care service infrastructure, especially for children and elderly members of the family, would facilitate women’s care burden of households. However, such changes cannot be achieved by formal position of the political leadership of the country only. Research reveals negative attitude of the Lithuanian decision makers (for instance, members of Parliament) towards implementation of gender equality measures in Lithuania. It is therefore necessary to actualise all, particularly economic, gender equality benefits at different –family, employment, social and political – levels. Keywords: gender inequality, Gender Equality Index, European Institute for Gender Equality (EIGE), European Union.