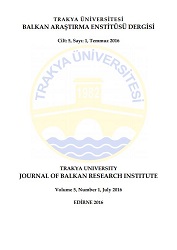 Summary/Abstract: The year 2016 is the 225th anniversary of the birth of István Széchenyi, named in Hungarian history “the greatest Hungarian”, and considered as the founder of modern Hungary. István Széchenyi has a particular place and a special significance in Hungarian history, for his ideas, his works, his efforts for the development and progression of Hungary.His works to put Hungary at the same level than modern contemporary European states (the Hungarian Academy of Sciences, Nemzeti Casino, shipyard, Lánchíd, ...) and the reflection system based on rational values he brought to Hungary allowed the Hungarian people to watch, interpret and evaluate the events through a broad perspective, and not be discouraged by the difficulties and face the future optimistically. The ideas and stance deal of István Széchenyi with events in one of the most difficult periods of Hungarian history were a guide for the Hungarian people.It will be useful to study the ideas, works of the Count István Széchenyi and the values he brought to Hungary, on the occasion of the 225th anniversary of his birth, to dedicate again its place in Hungarian history and Hungarian national consciousness.