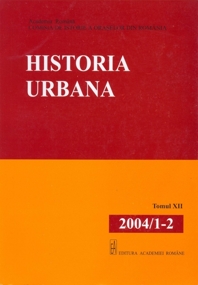 Summary/Abstract: Suceava is one of the most thoroughly researched Romanian (Moldavian) medieval towns, a great deal of historical, archaeological and architectural data having been recorded in the last 50 years. In addition, the last two decades brought a rich urban information. However, the latest studies concerning the morpho-structural and territorial evolution, using both classic and complementary („alternative”) methods, have not been archaeologically verified. The opportunity to perform researches, that could have revealed relevant data, at the moment of the massive demolishing works of the middle ’80 s, was not seized. In spite of the incomplete information, Suceava is the Romanian medieval town which successfully points out the existence of the three evolution stages characteristic for this class of towns: 1. The pre-state stage (up to the 14th century) 2. The genesis, consolidation and centralisation of the independent feudal states (14th to the 16th centuries) 3. The dependence on the ottoman Empire stages (including the Fanariot ruling, 16th to the 19th centuries). The town is located at the confluence of the Suceava river (the river bed was, in the previous centuries, close to the town it is today) and on of its small tributaries-the Cacaina river. The town was protected by the water courses, the cliffs existing along the shores and, indirectly, by the fortifications built on the surrounding high hills. The support-plan is the 1877 topographical survey „Suczawa sammt Ortschaften Kut, Itzkani, Schepelitz et Zamka in der Bukowina”, checked up with the plans from 1856, 189-1906 and 1907. These plans display the final medieval evolution stage, nearly unaffected by the minor town-planning Austrian interventions. 1st stage. The pre-state Suceava (till the mid 14th century) is not mentioned in any historical document. The existence of a settlement here is archaeologically proved by pinpointing an inhabited area of pre-urban level (13th century – the middle of the 14th century) crowded around a naturally defended area where it is believed that the residence of the local noble has been located. Today this place is occupied by the Mirăuţi Church (the first Metropolitan Bishopric of Suceava, acknowledged after 1401). The constituent elements of the settlement are the following: the residence (which must have been independently fortified with earth works, perhaps a palisade and a ditch), the inhabited area, fortified in a similar manner, and open inhabited areas. The reconstitution is based on the entire system of information (both archaeological and in plan) approached in an optimum manner. One can find numerous settlements, located on similar sites and similar as type, in the area inhabited by Slavic population, in central and north-north-east Europe (from the end of the 1st millennium and the beginning of the 2nd millennium till the 13th century) as well as in Moldavia (a certain case is Roman, for the period corresponding to the end of the 14th century