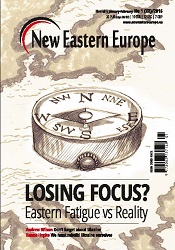 Summary/Abstract: Since the 1990s, the “multi-polar world” doctrine that is implemented by the Kremlin has been reduced to attempts at halting the spread of the western powers. The dominance of the West has significantly limited Russia’s influence in the world. As a result, the Kremlin has been increasingly showing signs that it wants to create its own model, which is a hybrid of the western one mixed with “traditional” Russian society.