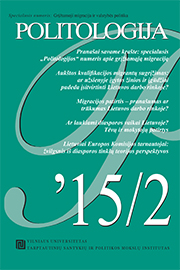 Summary/Abstract: While the concepts of brain drain and brain waste are frequently used to analyse migration from Central and Eastern Europe, this paper starts with an assumption that mobile workers usually gain important skills and knowledge which may help them to return and integrate into the labour market of the home country. Furthermore, this paper focusses on a very specific group for whom the above-mentioned effect is all the more likely: the highly qualified migrants defined narrowly as people with high education who held qualified jobs when working abroad. In this paper, the above-mentioned assumption is tested empirically, drawing on a number of surveys (representative surveys of Lithuanian residents, employers and returnees, a survey of graduates of the “Create for Lithuania” programme, an internet-based survey of highly qualified returnees) and interviews. We found that professional aims (such as the intention to take advantage of their skills and knowledge) were very important reasons for return, although they worked in parallel with broader family and home-sickness motives. In addition, around 2/3 of returnees in our sample mentioned that they wanted to contribute to the progress of Lithuania, and the majority of them agreed that they succeeded in doing that. The data also showed that most of the returnees in our target group were able to find employment without major difficulties. The majority of respondents indicated that skills and knowledge they gained abroad were very useful both for finding a job and pursuing a further career. We identified a number of structural factors that sometimes help and sometimes hinder the integration of the returnees. The returnees did take into consideration the improving economic outlook of the country (while many EU countries have been stagnating) and a rather high standard of the quality of life (in Vilnius). While the majority in the society and among the employers are quite sceptical about the human capital of the returnees (because they consider return as an evidence of failure), they are more receptive towards the highly qualified persons. In turn, the returnees themselves have to deal with a limited number and rather specific circle of potential employers where the appreciation of foreign experience is more likely (e. g., foreign-own companies). Furthermore, the returnees in our sample were also relatively skilled at presenting themselves and had many options for signalling their labour market credentials (such as diplomas, recommendations or brands of their foreign employers). In addition, a significant number of returnees do choose to become self-employed or start their own business. The public sector has played a contradictory role. On the one hand, the returnees were quite sceptical about the Lithuanian public sector in general (too much bureaucracy was the key criticism) and its migration policy efforts in particular. The continuous stalemate with regard to the double citizenship issue was frequently quoted as a symbol of the state being at odds with the needs of its mobile population. The returnees who actually returned to the public sector (six of our interviewees were university researchers) argued that gaining a permanent teaching or research position for scientists from “outside” is still way too difficult, the level of internationalisation and internal cooperation is too limited, and research agenda in humanities is too self-centred on national topics. On the other hand, some migrants returned in response to public sector initiatives, such as the programme for young professionals “Create for Lithuania”, EU-supported research grants, and the FDI policy that helped to attract some large employers of highly qualified employees (such as the IT unit of the Barclays bank). Our research also showed the continuing demand for “traditional” migration policy measures such as informing the returnees and helping their children to integrate into the system of secondary education.