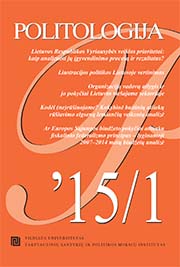 Summary/Abstract: Implementation of government commitments is one of the most relevant issues of public policy studies. A gap between electoral pledges, government priorities and their practical execution brought disappointment in many democratic countries and attracted significant attention from public policy researchers. This article elaborates a theoretical framework and sets several hypotheses for analysing the process of implementing performance priorities of the Lithuanian government and achieving their results. It argues that public policy decisions can be best explained by the interaction of advocacy coalitions in different policy subsystems. This process is affected by various external factors and events, which are usually an important but not sufficient condition for realising policy commitments. Within policy subsystems, it is necessary to assess beliefs, resources, and behavioural strategies of advocacy coalitions, coordination among different competing coalitions, leadership of policy change, performance management and policy learning during the implementation process. Also, in order to understand the execution of political priorities, it is important to take into account such important factors as the level of policy ambition and political attention throughout implementation. Moreover, any assessment of Lithuanian policy implementation should address such country-specific issues as fragmentation in the Lithuanian party system and competition between two blocs of political parties, the influence of the EU and Russia on the public policy process, and reform constraints imposed by decisions of the Lithuanian Constitutional Court. This theoretical approach will be employed for explaining the implementation of six major performance priorities of the Lithuanian Government 15 led by Prime Minister A. Kubilius: (1) preparations to build the Visaginas nuclear power plant; (2) higher education reform; (3) civil service reform; (4) restructuring the network of personal health care organisations; (5) structural reform of the social sector, and (6) execution of the housing renovation programme. A public policy research agenda focused on the analysis of government commitments can be also applied to assessing how specific political priorities or other policy decisions are carried out in Lithuania and other democratic states, as well as to explaining successes and failures of their implementation process. Causal process tracing can be employed for the within-case and between-case analysis of policy studies. Theoretically developed and empirically rich policy studies following this research agenda would provide interesting insights on policy implementation to researchers, politicians, civil servants, various policy stakeholders, and even citizens.