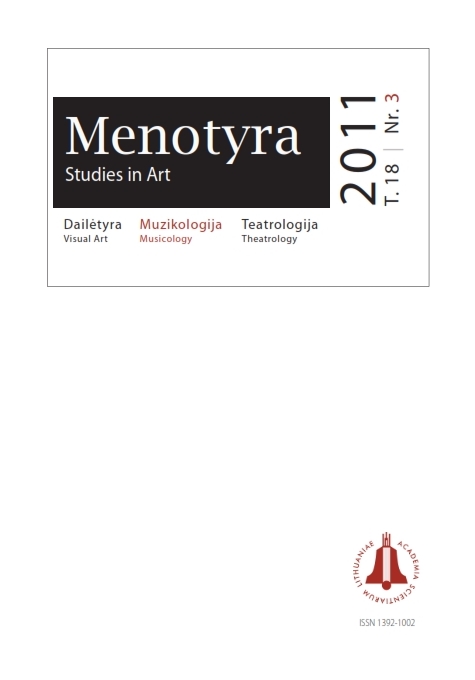 Summary/Abstract: Minimalism has played a very important role in Lithuanian music. It absorbed the features of folklore and myth and became a national style. One of its originators, the composer Mindaugas Urbaitis (b. 1952) distinguished for intellectual musical insights, created minimalism retroversion to Western music geniuses: J. S. Bach, W. A. Mozart, L. van Beethoven, F. Schubert, F. Chopin, and A. Bruckner. Romanticism was particularly widespread among minimalists, the authors of the new simplicity. It seems that M. K. Čiurlionis was the most popular figure as a large part of compositions of Lithuanian authors, being “under the sign of Čiurlionis” (R . Zubovas) is related to him. However, M. Urbaitis’ entering minimalism may be considered as a special bringing of the titan’s shadow, whose influence is still alive in the world, to the Baltic landscape. For his piece of music M. Urbaitis takes the title of F. Nietzsche’s book “Der Fall Wagner” (“The Wagner Case”, 1888, Turin) in which the philosopher unburdens his heart by demonstrating his adoration and criticism with respect to Wagner. Meanwhile Urbaitis dissociates himself from this and purifies Wagner (even the composition of the performers is minimal: flute, violin and viola), concentrates on spirituality and transcendence of his music and by using the Tristan and Lohengrin leitmotifs as well as the minimalism method (highlighting and repetition of details, openness of form, “sound of silence”) leads them to eternity and light.Another composition by M. Urbaitis, dedicated to M. K. Čiurlionis, is “Ramybė” (“Stilness”, 2000). It was named after the well-known Čiurlionis’ painting depicting the mountain reflected in the water and is not less popular and outstanding than “Der Fall Wagner” (1999). Here Urbaitis uses the motifs from Čiurlionis’ Nocturne (VL 183) cis-moll and Prelude (VL 239) d-moll which are especially romantic with the figurative impulses of “waves”, giving vitality to the static lucid and harmonious state of stillness. “Ramybė” is a composition of restrained piano stylistics (for piano and string quartet) representing spiritual harmony between Čiurlionis and Lithuania in the best way.