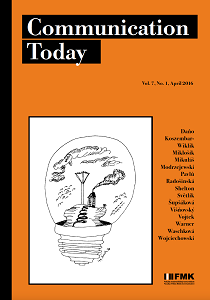 Summary/Abstract: This article offers analysis of a personalistic dimension of truth and dialogue in normative ethics of media communication by Karol Wojtyła who is better known as Pope John Paul II. Karol Wojtyła was also a philoso-pher who was involved in the reflections devoted to epistemological issues, although it was not his main field of study. However, the issue of truth was often present in his philosophical and theological considerations. In Wojtyła’s earlier, pre-pontifical works, the reflection dedicated to the truth was a part of his anthropological and ethical conception. The notion of truth had a deep personalistic nature in the philosophy of Karol Wojtyła. It was the truth about a human being understood as a person. In later times of his intellectual activity, after being appointed as the Pope, he outlined a social dimension of truth that was understood as a base of human and social relations. It also concerned the facet of mass media which is reflected on in this text. The article is writ-ten from the perspective of the normative approach. It is typical for the ethics; however, the content of the study should rather be classified as metaethics because it is in fact a metareflection. The text is divided into five parts. Besides Introduction and Conclusions, there are also paragraphs dedicated to the personalistic dimension of the ethics in the light of philosophy and papal teachings of Karol Wojtyła – John Paul II, to the importance of truth in media as well as to the need of including real dialogue in the mediasphere. In the conclusion the author states that in the light of Wojtyła’s ethics of mass media, a depreciation of the value of the truth and dialogue makes mass media audiences liable for the propaganda and so-called total truths which are a perverse form of objective truth.