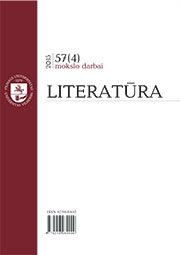 Summary/Abstract: This article is grounded in Hugo Dyserinck’s, a German comparatist’s idea that contemporary imagology can be likened to “European Studies”, as it examines self- and hetero-stereotypes of nations. Another German imagologist’s, Manfred Beller’s, statement that two nations can be often compared by the way of antithetical argument (the Spectant evaluates the Spected) is equally important: the critique of the other nation inspires the positive evaluation of one’s own nation and vice versa – negative opinion about one’s own nation results in positive evaluation of the Other. In this article the philosophical ideas by Bernhard Waldenfels and Hamid Reza Yousefi about the types of the Other were explicated and applied in the interpretation of the Short Story “The Faraway Land is Close Enough” by Siegfried Lenz. In this paper, the point of view of two German boys on the harsh reality of the Lithuanian postwar period is analyzed. The fourteen-year-old boys leave Kaliningrad, occupied by the Russian army, where starvation and compulsion reign, and travel by train to Lithuania. They end up there, begging for food from local peasants. In order to survive, they are forced to cross many moral boundaries, important during the time of peace.