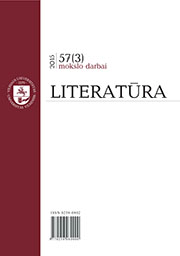 Summary/Abstract: The problem of Lithuanization of Ancient names was and still is relevant and not fully resolved. It is manifested by varied spelling of names as well as by ongoing discussions and considerations of this matter in the media. Translated books are often subject to criticism: the translators and editors do not have the competences necessary to understand the patterns of ancient languages so that they could Lithuanize the names properly themselves, nor have they a unified reference. Development of the Digital Database of Ancient Names may be a solution to the problem. The tradition of spelling Latin and Greek ancient names is not stable or prevalent in Lithuanian writings. It is obvious from various cases of use in Lithuanian writings, collected in the Digital Database of Ancient Names.In fact, there are no grounds for speaking about traditions of Lithuanization, because such tradition was not formed or established. This is particularly true for transcription of proper names of Greek origin. We can only note certain tendencies and influences of other languages in different periods.