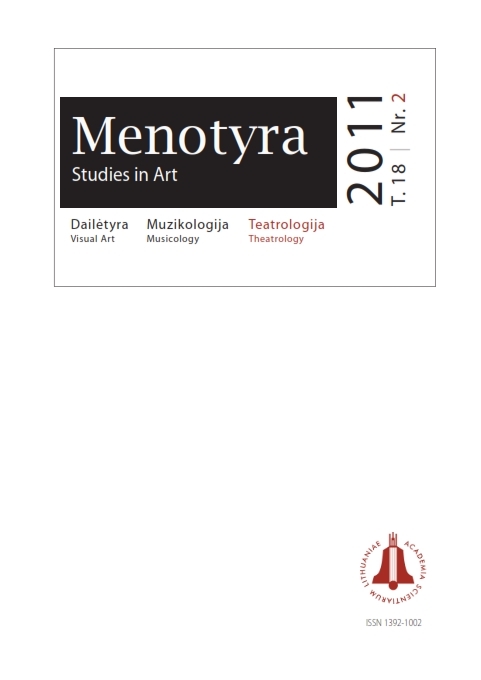 Summary/Abstract: In the article, analyzing the body of works by Lithuanian theatre director Jonas Vaitkus, the poetical model of his directorial conception is distinguished.The author interprets four productions of this director (“Pilgrim of Dreams” by Eugenijus Ignatavičius and Jonas Vaitkus, “Throstle – the Green Bird” by Bronius Kutavičius and Sigitas Geda, “All Souls Day” by Adam Mickiewicz and “Migel Manara” by Oscar Milosz as well as accentuates the regularities of the directorial mode of theses productions. Their composition develops consequently, and the emotional peaks are connected with the additional dramaturgical situations. Vaitkus creates an independent poetical language, because the origin of his theatre is symbolic. With the help of set designers ( Janina Malinauskaitė, Dalia Mataitienė, Jonas Arčikauskas)he creates an exceptional symbolic space.Poetical theatre of Vaitkus is disengaged from the descriptive means and could be considered as an independent genre with the peculiar artistic language, based on the conceptual directorial approach. The elements of this model become the cells of one artistic structure. One of the directorial aims of the poetical model is to restore the artistic freedom and joy of creation of the actor.