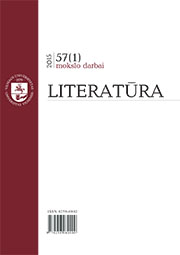 Summary/Abstract: This article deals with development of Lithuanian art of early socialist realism. The key issues of the article are following: what is the position of the Grand Narrative which was formed by mature modernism in narration of Lithuanian art of the then? The article refers to the concept of crisis of mature modernity and grand narratives. This concept has been formulated in Lyotardʼs book The Postmodern Condition (1979). The article expands this concept by sociological interpretations of Antony Giddens and historical philosophical interpretations of Wolfgang Welsch. Also the discourse of alternative modernism has been included in the discussion with artefacts of socialist realism which to the problem of the Grand Narrative renders importants arguments of fake history and altered character. The art of socialist realismʼ period has been considered against a background of concepts of modernism and alternative modernism as well as that of the tendencies of depersonalization, personification, collectivism and nationality. The narratives of the fine arts (sculpture, painting) have been evaluated from the point of view of literary narratives.