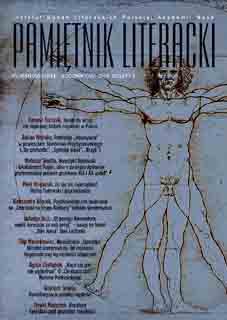 Summary/Abstract: The aim of the article is an attempt at interpretation of Jan Lechoń’s poem "Don Juan" from the collection "Lutnia po Bekwarku" ("The Lute after Bekwark") mainly from the angle of the presence of Commander – Don Juan’s main antagonist and also animated statue without whom the figure of most famous seducer in history would not have reached complete meaning. The author also strove to find possibly greatest number of cultural references, due to which a marked part of the paper is occupied by the figure of Casanova (symbolized by the statue of Bartolomeo Colleoni) and by a description of relations between the myths of Don Juan and Casanova. An attempt is also made to interpret Don Juan in the context of the whole collection of "Lutnia po Bekwarku" with special attention paid to intertextual plays with tradition, such as e.g. the use of the motif of animated statues referring to Stanisław Wyspiański’s "Acropolis".