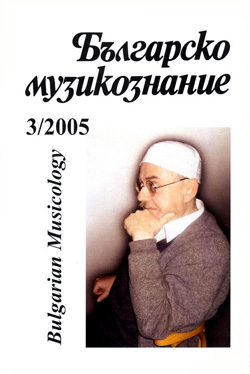 Summary/Abstract: The present article is the second part of a larger study attempting to reconstruct the individual life cycle in a local traditional culture (of the village of Kozichino, Bourgas region) through its music dimensions. In other words, it is devoted to distinguishing the age and social statuses in man’s life, taking as a base for this differentiation mostly one’s “rights and obligations” to participate in certain ritual and music activities (this involves music, dance and rhythmic incantations) during each stage of one’s life cycle. This viewpoint displays new layers of meaning in the functioning of the musical activities themselves. For example, in the previous publication (presenting the initial part of this study) it was clarified that in the first half of an individual life (until the birth of the first child) music activities are closely connected with two very important interwoven lines in the course of socialization -acquiring knowledge and/through overcoming hardships. It is shown in the present publication how the change in attitude of an individual towards the musical activities from previous phases of his/her life and the entry into the sphere of another musical repertoire are a significant part of the strategies for keeping whole the cultural system, for preserving the tradition (= preserving the knowledge and handing it down). A special attention is payd to the different role of women and men in this process. Two stages are differentiated in men’s mature age the first is transitional and allows the participation in bachelors’ music activities. The second stage, of real maturity, is characterized by static and dignified behavior. These features are most evident in the characters of “stananika” in Christmas-carol singing and the best man at a wedding - in these characters we see the function of a mature man as a “person” of the community, its moral corrective, a guarantee for the staunchness of the community organization. From a mythological perspective he is the king -priest, “more a representative than a conductor of the outer world” (after I.Racheva and A. Ilieva), and this removes him from musical activity at high ritual levels. Simultaneously, the mature man enters a new sphere- the songs “na sobat”, which have epic plots from local culture. If the mature man/husband guarantees the observation of the community “laws” with his very presence, the woman of the same age is burdened with the every day, even every minute control upon the observation of the rules, which guarantees the preservation of the cultural system. She has another very important task besides observing the rules- she has to introduce the growing children to them. An important moment from the upbringing strategies in the local culture is singing, located in time of “daily” features. The woman simultaneously hands down to her daughters the songs and the necessary skills in the female activities like spinning, weaving, etc., one is mastered through the other and vice...