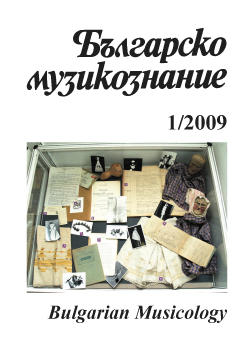 Summary/Abstract: This article is a part of a bigger research, dedicated to the music and the music folklore in philosophical and aesthetical viewpoints of Stoyan Djudjev, examined in the context of time, when they manifested themselves for very first time and perhaps in parallel continued to evolve. The research is based on Djudjev’s publications from 1930’s and the beginning of 1940’s. The particular about his articles from this time period is that the Nietzsche-an philosophy and outlook of life in the writings is not perceived as alternative of what is their musicological analogue of classical epistemological and ontological problematics - the positivist’s classificational and systematic point of view towards the object of research. These two cognitive approaches are closely intertwined and the connection between them is materialized in his viewpoint about the relations between music and language, speech and rhythm. Actually the connection between music and language is the moment in which the switch over in Djudjev’s way of thinking is accomplished, from Nietzsche-an outlook of life towards the objective and systematic science: for him the roots of music should be sought in ancient syncretism of language, music and gesture, but the base is in the articulate speech, and the melody is its sublimation. The key in Djudjev’s scientific standpoint is the unchangeable connection between the knowledge of music and language, and more precisely the knowledge of its phonetic peculiarities. Via the third element of the triad of the primordial syncresis – the dance or rather the gesture, is examined the role of rhythm in the scholar’s viewpoint, because rhythm is the unifying link of the elements of the triad. These are the aesthetics of Djudjev’s way of thinking and they are in unison with the characteristic for the end of 19th and the beginning of 20th century quest for the origins of the art. The language and the rhythm though give a possibility to cross over the field of scientific work (understood by him as deeply rooted in natural science). By rhythm, the science of music (and art in general) is bound not only with the aesthetics, but also with the mathematics, the physics (respectively the acoustics), and also with the psychophysiology and the psychology. In his scientific texts we find Kant’s and Ernst Mach’s ideas as well as neopositivistic tendencies towards mathematical and formal approaches in scientific research, and the ultimate awareness of clarifying the logical, and from there on the terminological apparatus of science.