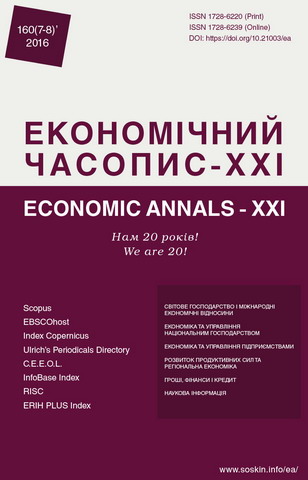 Summary/Abstract: This article deals with the value of research and development (R&D) indicators before, during and after the economic crisis of 2008-2009. Higher R&D intensity and higher R&D manpower are found to be predictors of improved firm performance. On the example of four countries with various level of R&D, we try to show if crisis influences this area of economy in the selected countries, namely, Germany, Finland, Slovakia and the Czech Republic. We analysed the period of 2006-2014, as the indicators of the year 2015 are still not available, paying particular attention to Slovakia. For the analysis, such indicators were chosen: expenditures on research and development per inhabitant and as a per cent of GDP; number of university graduates; number of companies in high-technology sector and total high-tech trade (export and import) as a per cent of total trade. According to analysed indicators, the leading countries in research and development were Finland and Germany. Slovakia reached the worst results in expenditures to R&D. Another conclusion of our research was that the crisis does not cause significant changes in research and development area. Despite the fact that in the years 2008 and 2009 there were lower values of some R&D indicators compared to the other years, the crisis did not make a serious impact on analysed sphere.