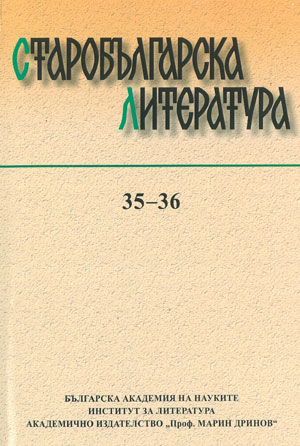 Summary/Abstract: This article is an attempt to identify the martyrs mentioned in the small ceramic fragments discovered in Preslav that had once accompanied pieces of saints’ relics. Bearing in mind the strong connection between the translation of relics and the production of texts, the author examines the literary tradition of these saints in the oldest South-Slavic manuscripts searching for some traces of their veneration. One of the saints seems to be entirely missing from the Slavic tradition and appears quite rarely in Greek sources. Thus, it is suggested that the relics stored in Preslav belonged to St. Marina of Antioch (who in the tenth century was already popular on the Balkans), rather than to St. Maria of Antioch. Furthermore, with the exception of Maria of Antioch, all the saints named in the ceramic “labels” were patrons of churches or monasteries in and around Constantinople (for some of these churches and monasteries it is explicitly stated that they had possessed the relics of those saints). Since it is clear that all the pieces of the relics came to the Bulgarian capital together, it is more likely that they were brought there either as a result of some of the triumphal victories of Tsar Symeon (for instance, in 922 his army devastated the surroundings of Constantinople and destroyed the monasteries of Theotokos τη̃ς Πηγη̃ς) or as a special gift during the reign of his son, Tsar Peter, who married a Byzantine princess and made long-lasting piece with Byzantium.