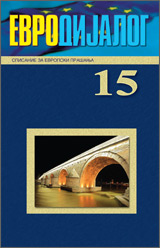 Summary/Abstract: Corruption in Macedonia, as in many countries, has been identified as one of the biggest obstacles for the democratization and economic development of the country since its independence. This paper argues that anticorruption policy in Macedonia has been unsuccessful because it is centered on the introduction of legislative measures copied from Western societies. Such measures are not fruitful because they disregard the particularity of the country and the cultural and historic predispositions, and create only an illusion of fighting corruption, while lacking genuine political will. The paper therefore analyzes the specific nature of corruption in Macedonia, in line with the historic, cultural and economic circumstances of the country.