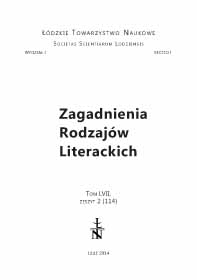 Summary/Abstract: The paper examines generic and stylistic relations between the novel Pharaoh by Bolesław Prus and the 19th century writings devoted to the ancient Egypt. Monographs, handbooks, reportages, newspaper articles are considered not so much the sources of the knowledge as the sort of generic matrix elaborated for people of the West to write and read on the Egyptian civilisation. The author discusses several connections between Pharaoh and the content of “Tygodnik Ilustrowany”, a weekly where the novel was published. The 19th century press is considered here not a merely medium for a novel in serial nor even a simple source of ideology, but also a network of generic and thus cognitive instruments necessary for a novelist.