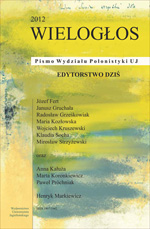 Summary/Abstract: This text is a review of the latest book by Agata Bielik-Robson as seen in the context of all her intellectual projects. The authors point to a significant shift of Bielik-Robson’s interest which leads her toward the reinterpretation of the texts of Jewish philosophers who represent messianic vitalism. The reviewers also try to present what for Bielik-Robson is the main opposition between Eros and Thanatos and explain what Erros is – the third way which is proposed by the philosopher as an alternative for the subject defined by the tragedy of existence. The authors of the review also point in a slightly polemical mode to the philosophical contexts only marginally presented in the book (mainly Vattimo’s pensiero debole) which need to be defined more precisely but are sometimes deliberately ignored by the author.