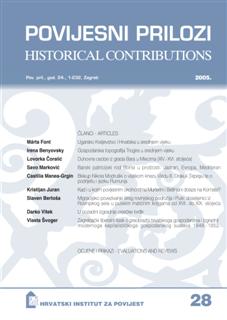 Summary/Abstract: Medieval Hungary and Croatia were, in terms of public international law, allied by means of personal union created in the late 11th century. Although Hungarian-Croatian state existed until the beginning of the 20th century and only the Treaty of Trianon marked its final ending we can perceive the year 1526 as a divide. Mostly because the political situation after the battle of Mohács – the king’s death, two elected rulers, Turkish conquests and, consequently, the splitting of Hungary into three parts – changed the entire medieval relation system. This study plans to deal only with the conditions prior to 1526 and primarily wants to present an overview of positions of Hungarian historical science.