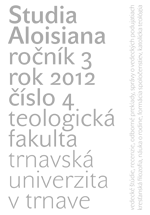 Summary/Abstract: The paper enounces a renewed interest in Thomas’s theory of natural law in the context of contemporary moral-philosophical scene. It presents several reasons of this turn as well as reasons of its only a partial success. Further, it pursues how the Thomas’s natural law theory can sustain the platform of universality in ethical values, at the same time respecting the historicity and the diversity of subjects and cultures. It shows the neglected difference between the permanent universal and variable derived precepts. Universal principles guarantee the possibility of the agreement in the most universal values. Derived precepts, referring the principles to the unrepeatable circumstances and allowing the graduality of man’s progression in moral life, guarantee the possibility of difference. Finally, the paper concludes that the Thomas’s natural law conception offers the vision of how people as rational beings can arrive to mutual comprehension concerning the most important aspects of the good and the evil, sustaining the cultural differences in which they differ.