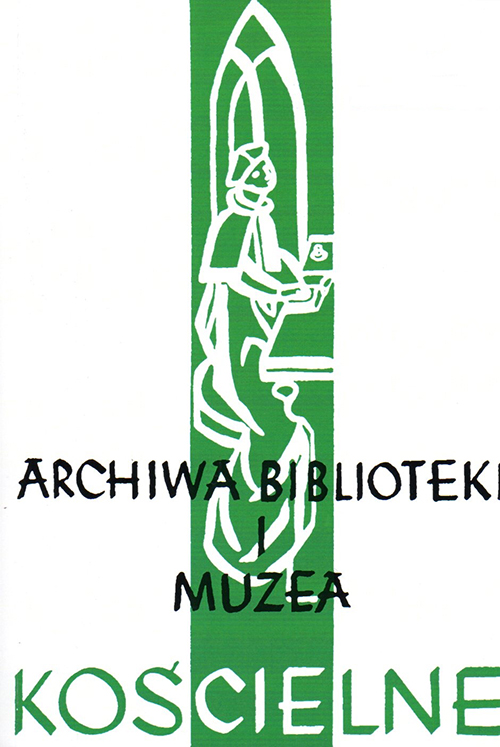 Summary/Abstract: The article discusses several elements of decoration and equipment of the Franciscan church in Jasło, destroyed during the Second World War, which was designed by Michał Łużecki, an architect from Lviv. These elements were created by a known Lviv sculptor Antoni Popiel. They are stone elements of church facade decoration (the statue of Our Lady of the Immaculate Conception and the bas-relief emblem of the Franciscan order) and wooden sculptures adorning the altar of the church, depicting such saints as: St. Anthony of Padua, Alphonsus and St. Francis de Sales. All were created in 1904-1905. These decorations evoke the names of the above mentioned sculptor’s collaborators from Lviv: Albrycht, a stonemason (the emblem creator); Michał Łużecki, an architect (the designer of the altar) and Tadeusz Sokulski, a woodcarver (the altar creator).Only one of Anthony Popiel’s works made for the Franciscans in Jasło survived to the present day- the statue of St. Anthony. It was originally placed in the central place in the structure of the main altar of the destroyed church. Today it is in the side chapel of the new Franciscan church, built after the war at a new site. This figure, miraculously saved from destruction, has long been worshiped in Jasło, which in 1996 led to the recognition of St. Anthony of Padua as the patron saint of the town by the Town Council in Jasło. December 27, 2014 marks exactly a century since bringing the figure to Jasło.The article draws attention to the artistic values of the preserved sculpture, comparing it with other representations of this saint of that time created in the area of influence of the artistic community of Lviv. It can be concluded that the sculpture from Jasło is the work of an artistic value, the work which is an individual interpretation of the theme proposed by the sculptor. It can also be noted that Anthony Popiel’s works from Jasło, hitherto unknown to historians of art, are an interesting complement to his artistic achievements and significant contribution to the relationships between the sculptor and other artists associated with Lviv. The article is supplemented with the copy of Anthony Popiel’s letter of January 15, 1906 to the Franciscan Provincial, Father Peregrine Haczela, containing the estimate of three figures for the main altar of the former Franciscan church in Jasło. The letter is stored in the Franciscan archive in Cracow.