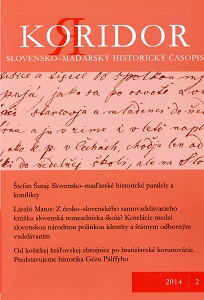 Summary/Abstract: The Kor/ridor, Slovak-Hungarian Historical Journal has come to existence as a result of cooperation between the Research Institute of the National Self-Government of Slovaks in Hungary, the Institute of History of the Slovak Academy of Sciences, the Forum Minority Research Institute and the Institute of History of the Research Center of Humanities of the Hungarian Academy of Sciences. The founders’ intention through the journal is to create a professional forum between the two countries and nations, a bilingual, permanent platform, which provides the continuation of the dialogue, a better understanding of each other’s historical researches and an efficient exploration of our shared past. The first volume of our journal is opened by the study of Štefan Sutaj, the Slovakian co-president of the Hungarian-Slovakian Historians’ Mixed Committee, which has been written as the methodological introduction to the common Hungarian – Slovakian History book, and it is first readable in our journal. The author analyzes the history of relations in Slovak and Hungarian historiography and the possibility of writing common historical works. László Matus’s study is devoted to the Sunday school of the Slovak Lutheran congregation in Budapest, acting in the middle of the 1840’s. The author examines the school’s foundation, function and cessation and searches for answers to the following questions: how did the function of the Slovak Sunday school fit in to the national and the Lutheran educational system, or had it been connected to the self-organizations and educational aspirations of L’udovít Štúr and his contemporaries? In our Critique coloumn we present an anthology of systematically new studies of young Slovak historians, the new critical edition of Matthias Bel’s great work Notitia Hungariae, a memoranda about the 1938–1939 period in Slovakia, a monography of the history of the German–Slovak–Hungarian Lutheran Church in Budapest, as well as a volume analyzing the historical view of the 20th century Slovak history books. Finally, we would like to present one of the most significant Hungarian researchers of early modern Hungary; Géza Pálffy.