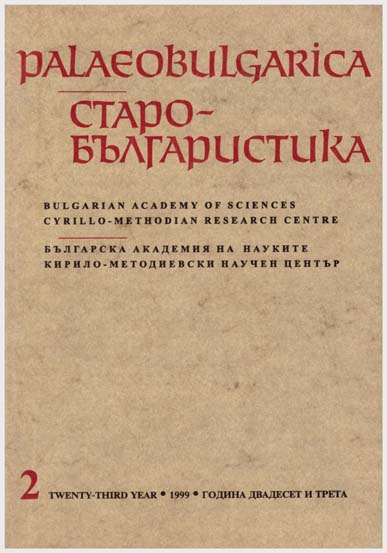 Summary/Abstract: During the last new excavations at the “SS 40 Martyrs” Tărnovo church the archaeologists discovered an unknown fragment of the mediaeval painting of the shrine to which this paper is dedicated. The mural painting is on the wall of the southern apse and has remained plastered after the later reconstructions of this part of the church. Afterwards the restorers removed the remaining part of the plinth painting with drapery ornamentation on which are arranged large calligraphic letters – Ï (?), К, Ž, Л, Œ, Ꙋ (?). Several variants of deciphering have been admitted, one of which proposes a reconstruction of the plinth painting in the three apses of the church and the possibilit on them to place 40 letter signs and be interpreted as initials of the patrons of the church – the SS 40 Martyrs of Sebastia. In this sense the newly discovered wall-painting in the deaconicon is the only surviving painting which could be linked to the decoration of the church in 1230 according to the donor’s inscription of King Ivan Assen II.