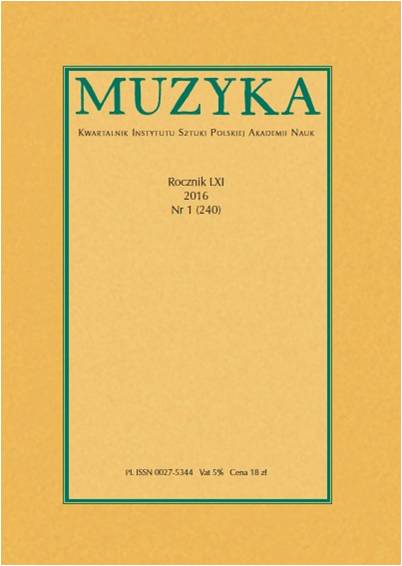 Summary/Abstract: The opera 'I Lituani' [Lithuanians], written in 1872 by Amilcare Ponchielli (1834–86), a major Italian opera composer of the second half of the nineteenth century (his works include 'La Gioconda'), is one of the few operas inspired by the poetry of Adam Mickiewicz to be written by foreign (non-Polish) composers. The libretto, drawing on the themes of Mickiewicz’s narrative poem 'Konrad Wallenrod', was written by Antonio Ghislanzoni, who also wrote the book of Verdi’s 'Aida'. The premiere of 'I Lituani' took place at La Scala in Milan on 7 March 1874. A comparison of the structure of the libretto and Mickiewicz’s poem reveals a range of modifications and adaptations that Ghislanzoni was forced to introduce in order to obtain a text suitable for dramatic performance. Apart from obvious reductions, transformations and the inevitable elimination of the author’s voice from the narrative, the text of the libretto reveals departures from the original that reflect both an aspiration to realism and also the theatrical qualities sought by the composer and the librettist. In many ways, the musical language of the opera brings to mind the style of Verdi’s late operas. Like Verdi, Ponchielli employed the technique of recurring motifs (or rather musical themes) that function as reminders. But the overriding principle behind Ponchielli’s design of the opera was the idea of creating elaborate ensemble and choral scenes featuring many characters. Compared to Mickiewicz’s relatively intimate narrative, the opera displays a considerable transformation of the poetical work and markedly different means of expression. The reasons for such far-reaching modifications of the original should no doubt be sought in the aesthetic and cultural differences between the Polish and Italian artistic traditions of the nineteenth century and linked to the expectations of the audience, who insisted that the expression of the characters’ experiences be given an adequate setting on the stage.