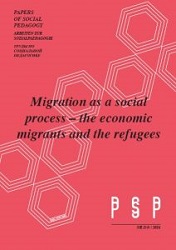 Summary/Abstract: The influx of refugees to EU states in recent years has contributed to the rise of xenophobic and racist sentiments. In at least several countries parties and organizations that are far-right, eurosceptic, with a negative attitude to the admission of migrants and demands for wide political changes got into public debate. This paper is a case study of German organization PEGIDA, which, as I will try to prove, is the avant-garde of new far-right movements. The features I will discuss include an extremely efficient use of social media websites to mobilize supporters and building transnational alliances with ideologically similar organizations from other European countries but not only. I will describe the history of establishing PEGIDA, profiles of its activists, relationships with other groups such as HoGeSa or the Alternative for Germany, as well as the demands they make, comparing individual topics with the situation of nationalist organizations in Poland. I will also show that the opposition to Islam, in spite of being the flagship slogan, is only an excuse for making a wide range of demands and reactivating anti-establishment resentiments, which I will discuss in detail. Finally, I will analyse the real roots of the rise of xenophobic sentiments on the continent, linking them to the economic crisis and the neo-liberal model of societies.