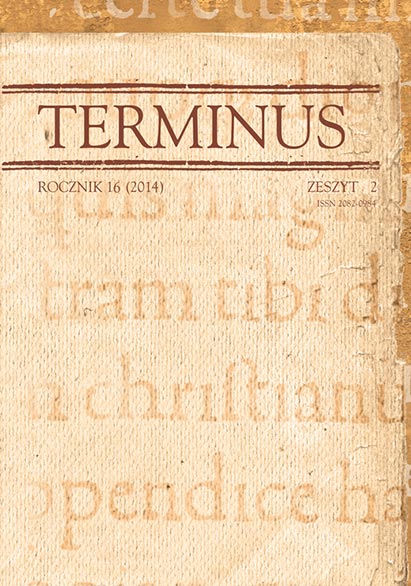 Nieobecna „książka białogłowskiego konceptu”. Kobiety, kanon i badania literatury dawnej
The absent book “penned by one of the fairer sex”. Women, canon and the studies of early modern Polish literature

Summary/Abstract: The main goal of the paper is to focus on the image of the past suggested by the present state of the studies of early modern Polish literature and to propose a new and more inclusive approach to it. Using the debate on Western canon and its formation as well as the specific example of A Transaction, or an Account of the Entire Life as an Orphan, a memoir by a 17th century author, Anna Stanisławska, the author of the paper argues that what is believed now to be the canon of early modern Polish literature is rather a result of conscious decisions made by present scholars rather than an adequate representation of the past literature. The paper proposes answers to the following questions: What is lost from the image of the past as argued by the scholars when they fail to mention texts like the Transaction? How does the image of the cultural past change when one decides to acknowledge such texts? In Canon’s discourse. Fragments, the first part of the paper, the author relates briefly the debate on Western canon and its formation. He reminds that the different answers to the central question ‘what Western canon is and how it came to be’ translate to different sets of professional and political responsibilities associated with being a scholar. In Canons, syllabuses, reading material. What is ‘early modern Polish literature’?, which is the second part of the paper, the author tries to pinpoint texts which form the canon of early modern Polish literature. It consists of the texts that are actually taught at the faculties of Polish literature and are presented to their students as the early modern literature. The author analyses the curriculums of certain literary courses held in six Polish universities and finds ten recurring authors. He argues then that these authors, although respected, represent only one type of early modern Polish literature – written by the well-educated, Latin-speaking men. Consequently, the author proposes to broaden the perspective of literary studies by including in their focus such texts as the above mentioned Transaction. In Case study. Anna Stanisławska, women’s literacy and writing in the 17th century, the third part of the paper, he recapitulates briefly Stanisławska’s life and proceeds to show strong connection between Anna’s memoir and literary culture of her age (which can be seen in the way she employs topos humilitatis). He also points out that the appearance of such a text in the 17th century of all periods was no accident. During Stanisławska’s life, the number of schools dedicated solely to educating women in the Polish-Lithuanian Commonwealth was increasing. Although the literacy remained far below the level achieved in Western Europe, reading and writing became much more widespread among women. The author argues that leaving Stanisławska’s text out of the curriculum results also in failing to properly represent cultural shifts which came to pass in the 17th-century Poland. The author of the paper concludes that practicing literary history focused both on writers well-known as well as neglected like Stanisławska is a valid opportunity for a modern scholar. Not only does it enable them to create more complete narration about the past, but it also helps them grasp the consequences of the images of the past produced by their narration.