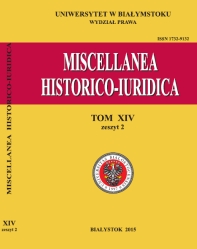 Summary/Abstract: Mieczysław (Moses) Maślanko (1903–1986) was one of the most prominent personalities among the lawyers of communist Poland between 1945 and 1956. He was born in Warsaw in a Jewish family. In Warsaw, he finished his secondary education and graduated from the law department of Warsaw University in 1926. Between 1927 and 1933, he took a court and defence attorney internship and became a registered attorney. During the German occupation of Poland in 1939–1945, he was persecuted by the Germans. Until 1943, he was kept prisoner in the Warsaw Ghetto where he was appointed Chairman of the Disciplinary Court at the Judenrat. Between April 1943 and May 1945, he was imprisoned in theMajdanek concentration camp, Auschwitz concentration camp, and Sachsenhausen concentration camp. Upon his return to Warsaw, he resumed his work as attorney. He specialised in criminal cases. The communist authorities allowed him to participate in the court trials of the regime opponents. He defended (participated) in political trials before military courts and before the so-called “secret courts-martial” which in fact were a travesty of justice. He was admitted to the register of court-martial attorneys and his name showed also in the “secret registers”, i.e. of attorneys who were authorised to participate in secret trials. His contribution to the most famous trials of the opponents of the communist regime was to support the statements of the prosecution. In 1946-1956, he was a member of the Supreme Council of Attorneys (Bar association) which was in fact filled by way of a decision of the Minister of Justice. After 1956, the attorneys representation bodies filed several disciplinary cases against him. After 1956, he continued to work as a criminal defence attorney.