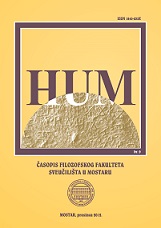 Summary/Abstract: After May 1945 prisoners from Croatian concentration camps and prisons, especially from Požega and Slavonski Brod, were transported to Bosnia and Herzegovina. The vast majority of prisoners were confined in Sarajevo and Mostar concentration camps, from where the unknown number was taken to Stolac, Nevesinje, Bileća, Trebinje and Montenegro. According to the witnesses’ statements those persons have never come back home, therefore it is assumed that they were killed in many pits and graveyards in the area of East Herzegovina. Speleological researches confirmed that there are human bones in some pits, but suffering of Croats in that area is still not enough explored. Although most of testimonies speak about prisoners’ coming via Slavonski Brod, the traces also lead to Split and Dubrovnik. Many sources, including the archive, confirm close contacts and cooperation of Dalmatian and Herzegovinian communists and authorities (especially OZNA), because of what exploring of war crimes done in East Herzegovina and South Dalmatia is very complex.