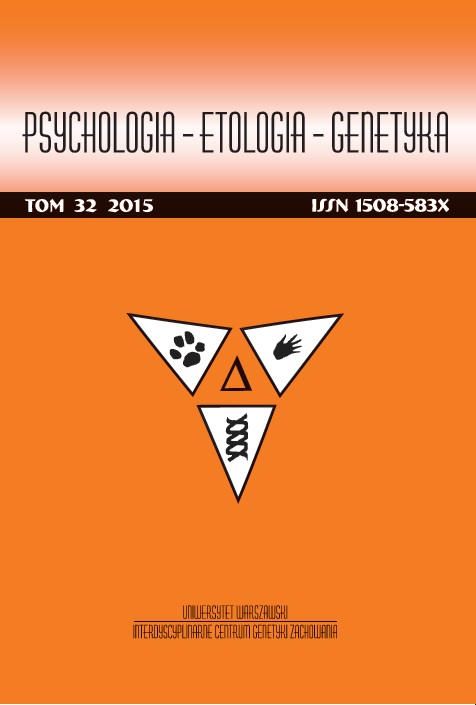 Summary/Abstract: The purpose of this study is to explore the relationship between temperament traitsas postulated by the Regulative Theory of Temperament and affective disorders, alcoholdependence, and clinical obesity. The aim of the study is to verify the hypothesis ofa common genetic basis for the traits and disorders by identifying associations betweentemperamental traits and behavioural and disorders and polymorphisms in the genesCRHR, DAOA, TPH, ADH, and GABRA. The study included 137 patients (51 men and86 women) aged from 19 to 85, suffering from affective disorders. This group comprised94 patients with bipolar disorder and 43 with recurrent major depressive disorder. Thesecond group consisted of 194 alcohol-dependent men aged 21 to 71. The third groupincluded 163 obese patients (BMI > 40), comprising 59 men and 104 women aged from19 to 80 years. The control group consisted of 207 healthy subjects, including 89 menand 118 women, aged 18 to 71.Alcohol-dependent men scored lower on the sensory sensitivity scale compared tothe control group (no significant differences on other scales). Patients with affectivedisorders obtained lower results on the briskness, endurance, and activity scales, buthigher on the emotional reactivity scale compared to the control group, and the sameobservations held true in comparison with alcohol-dependent men. Obese patientsscored lower on the briskness, endurance, activity, and perseveration scales comparedto the control group. They also got lower results on the activity scale in comparison withalcohol-dependent men. Compared to patients with affective disorders, obese patientswere less emotionally reactive and their endurance was greater.Genetic analysis showed that alcohol-dependent men, patients with affective disorders,obese patients, and the control group were differentiated based on the frequencyof genotypic polymorphisms in two genes: DAOA and TPH2. 58.2% of alcohol-dependentmen were found to be carriers of the CC genotype based on the extracted polymorphismrs1386482 in the TPH2 gene. This is significantly more than in the group withobesity (48.7%) and in the control group (43%). On the other hand, 58.6% of the affectivedisorder group were carriers of this genotype (significantly more than in the controlgroup, at 43%). Further analysis showed that in the alcohol-dependent and affectivedisorder groups, carriers without genotype variant A (i.e. the CC) were more common,but in the control group, the genotype variant A (AC + AA) was more predominant. Itseems that the CC genotype associated with TPH2 gene is a predisposing factor formental disorders (alcohol dependence and affective disorders).Analysis using genotype frequency based on the polymorphism rs1935062 in theDAOA gene showed that alcohol-dependent men were significantly more likely to becarriers of variant C (genotype AC + CC) compared to the control group, with significantlyfewer carriers of homozygous variant A (who dominated in the control group).The differences between the other groups were not significant. It seems that the presenceof variant C predisposes subjects to alcohol dependence. The association analysisshowed that only rs1789891 polymorphism in the ADH gene cluster was associatedwith briskness, sensory sensitivity, and activity in the control group. No association wasobserved between other traits and genetic polymorphisms in other groups.