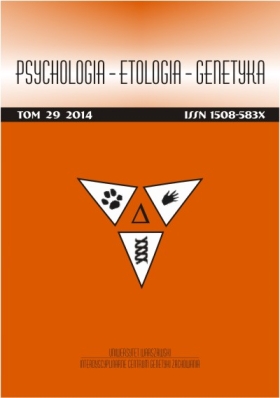 Summary/Abstract: The purpose of this study was to identify the profile of temperament traits postulated by the regulative theory of temperament in patients with ICD-10 diagnoses of bipolar disorder and alcohol dependence. Three groups participated in the study: 120 patients hospitalized for bipolar disorder (BP), including 60 women and 60 men aged from 19 to 72 (M = 48,32; SD = 12,44), 170 patients with alcohol dependence (AD), including 70 women and 100 men aged from 20 to 69 (M = 47,01; SD = 11,21), 240 healthy controls, including 120 women and 120 men aged from 19 to 72 (M = 48,25; SD = 11,41). Temperament traits were assessed with the Formal Characteristics of Behaviour – Temperament Inventory. Groups BD and AD had higher levels of emotional reactivity, perseveration and sensory sensitivity compared with the control group. Group BD had lower briskness, endurance and activity than the control group. Group AD had higher endurance than the control group (no differences were found for briskness and activity). Group BD had higher emotional reactivity and perseveration than group AD and lower briskness, endurance and activity (no differences were found for sensory sensitivity). Emotional reactivity and perseveration are components of a combined mechanism responsible for the psychological distress which underlies affective disorders and alcohol dependence. Patients with alcohol dependence probably have more temperamentallydetermined adaptive capacity compared with patients with bipolar disorder.