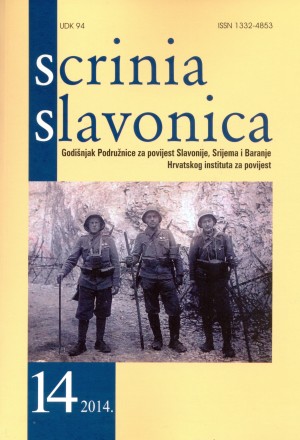 Izvanredan izvor o zemljopisnim znanjima ugarsko-hrvatske političke elite 16. stoljeća: popis ugarskih i slavonskih gradova, utvrda i kaštela
A unique document on the geographical knowledge of the political elite of the Kingdom of Hungary in the middle of the sixteenth century

Summary/Abstract: The study presents a unique source from the collection Reichstagsakten of the Haus-, Hof- und Staatsarchiv in Vienna: a list of 262 towns, fortresses and castles captured by the Ottomans in Hungary and Slavonia from the Battle of Mohács (1526) to 1556, its background and its possible sources. The register was compiled by the Hungarian- Croatian political elite of the Kingdom of Hungary led by Palatine Count Tamás Nádasdy at the beginning of March 1556 in Vienna for the information of the estatesof the Holy Roman Empire assembled at the Imperial Diet of Regensburg in 1556/57.The analysis of the document’s genesis proves that the Hungarian-Croatian politicians as well as the Austrian generals of the Croatian-Slavonian and Hungarian border fortresses had very good and detailed information about the geographical and geopolitical situation of the country and the Hungarian-Ottoman frontier regions. They used not only an unknown manuscript version of the map of Hungary printed by Wolfgang Lazius in Vienna in 1556 but also their personal geographical experience collectedduring their service in various high political and military offi ces in Hungary and Croatia-Slavonia in the preceding decades. Thus, the list is a very important source for the Hungarian,Croatian and Austrian-German history, fortress-archaeology, cartography, and geography.