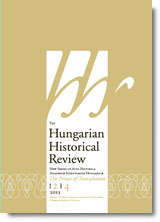 Summary/Abstract: The essay examines the network of relations between the estates of the Kingdom of Hungary and Gábor Bethlen, Prince of Transylvania (1613–1629) and elected King of Hungary (1620–1621), between 1619 and 1622. Because these years in the midst of the Thirty Years’ War (1618–1648) represented a genuine crisis period for the Central European Habsburg Monarchy, the topic demands particular attention from an international perspective as well. Despite this, hitherto neither Hungarian nor international scholarship have examined this question. The study attempts to fill this gap on the basis of research conducted in archives in Austria, Hungary and Slovakia. First, it will demonstrate how many of the political elite in the Kingdom of Hungary supported the Transylvanian prince in 1619–1621 and in what way. Second, it will draw attention to an almost completely forgotten compromise between Emperor Ferdinand II (1619–1637) and the Hungarian estates reached at the Hungarian diet at Sopron (Ödenburg) in the summer of 1622. Finally, it will present the winners and losers of this new compromise, as well as how Emperor Ferdinand and the monarchy’s political leadership were able to cooperate with the Hungarian estates.