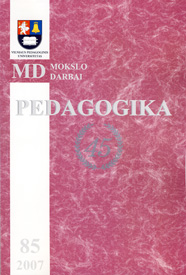 Summary/Abstract: Over the short period of independence, Lithuania gained considerable achievements in all cultural areas and in education as well. In 1918-1940, the education science was developing under the complicated national and International circumstances; it was nothing less than indiscrete but shaped by many factors. First and foremost, die education science of diose times was a natūrai follow-up of die national pedagogical thought which was unfolding togedier widi the national school at the end of XIX century and also, at the beginning of XX century, when die Lidiuanian national movement grown up again and die Lidiuanian printing was legalized after 1904. The educational science of Lithuania of that period was influenced not only by the Eastern pedagogical thought but by that ofWestern as well, which was based on a diverse philosophical, ideological - political and pedagogical motivation; an attempt to cover educational aspirations of various Lidiuanian people was made dien. The years 1918-1940 signify the creation of a national education science in Lidiuania for die first time; it ranged over the researches of wide educational problems - starting from the analysis of separate pedagogical ideas and finishing with the development of a whole educational system. Isolated problems of education, school and teaching were examined by a fair number of pedagogues of that period.