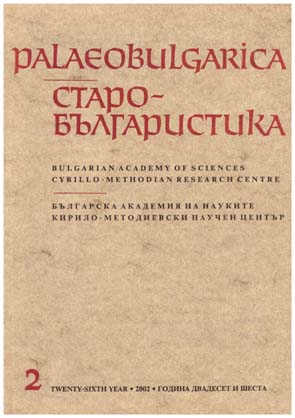 Summary/Abstract: The formation of the earliest Slavic Corpus Cantilenarum or the corpus of chants is related to the activity of Sts. Cyril and Methodius. Though that there is an immense literature on the two brothers, their musical activity remains among the poorest field of study. According to the extent sources the translated and original works of the two Slavic Apostles are presented in the article. It is concluded that they knew both musical styles of the time – the syllabic and the melismatic. One of the basic musical-hymnographic forms is discussed – the kanon: the two brothers developed this form according to the main tendencies of the time. The compositional technics that were used by both of them, the principles of their translation, as well as the notational systems that it is suggested that they have used, are observed. The question of the relation between the East and the West in the field of music is also discussed in terms of the appearance of the notated literature during the 9th century. Some arguments are given that the two brothers knew well the liturgical practice according to the Studite Typikon and it was this practice that they have followed in their work. It is concluded at the end that the earliest old Slavic Corpus Cantilenarum was formed in the time of Cyril and Methodius. It was formed in the form that allowed this corpus to be transmitted, accepted and developed further as a separate branch in the cultures of the newly baptized Christian countries Bulgaria, Russia, Serbia, Walachia and Moldavia.