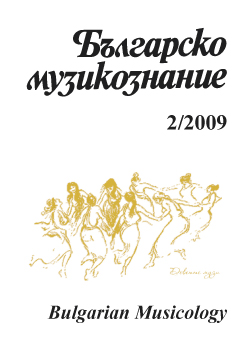 Summary/Abstract: This text discusses the eight mode system, on which the entire early music of the Eastern and Western Church was based on. The studies are done according to the primary sources on one hand and the manuscript collection from the library of St. Catherine’s Monastery on Mount Sinai (available on microfilms) on the other. The oldest sources of this collection date from 7th century onwards and show that already then (before the appearance of the notated pieces in the 9th century) the Oktoechos system was in use and displaying a high level of organization. The Sinai collection is the most significant collection providing materials of the earlier Christian tradition; showing its development in one of the largest and most important Christian centers (at least until the 9th century) – Jerusalem; the Holy City, acted as crossroads for a number of liturgical traditions, while the Jerusalem liturgy is still an important link between the tradition and a number of developments elsewhere. The Sinai manuscripts also outline the development in three of the oldest Christian monastic foundations: the Sinai, the St. Sabas monastery near Jerusalem, and the Studios monastery near Constantinople. Thus, the Sinai manuscripts present a homogeneous picture about the development of the earliest Christian liturgy and culture in the East (at least until the 12th century). The major purpose of this research is to show what, where, and how, according to the studied sources, the medieval chant repertories have been assembled to form an Oktoechos. The author was limited to the sources as late as the 12th century: the time when the Orthodox chant repertories and the Liturgy had achieved a comparatively stable written format in liturgical books. The Sinai manuscripts have revealed the earliest Oktoechos, both as a modal system and as a chapter of a book, the so-called Tropologion. The Tropologion is considered to be the earliest known, still existant chant book from the early Christian world that was in use until about the 12th century. The study of the book is still in its infancy. It has been generally believed that the Tropologion has survived only in its Georgian translation, the Iadgari. However, similar books have resurfaced in other languages as well: Greek, Syriac, and Armenian. All copies clearly show that the book was widely spread and its use was much greater than previously assumed (the Georgian Iadgari is just one of its translations). In terms of revealing the entire history of the Tropologion, three issues have become very important: the content of the repertory, its arrangement, and the liturgical calendar, according to which the services were organized. The study of these three topics unquestionably confirms: earlier compilation of the Tropologion, which might have been done in Jerusalem or in its outer lying region; outlines its uninterrupted development from Jerusalem to the Studios monastery and beyond; and places it among the most important primary...