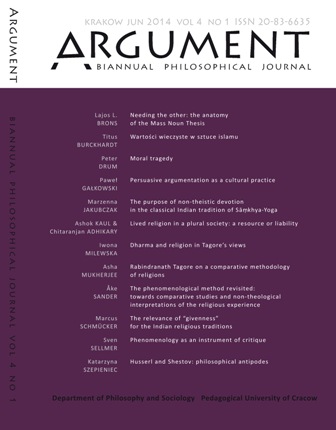 Summary/Abstract: Rabindranath Tagore (1861–1941), one of the greatest contemporary Indian thinkers, discussed the problem of comparative study of religion and faith on the grounds of global pluralism and religious diversity. He presented his views in numerous poetical works but he also delivered many speeches, mostly addressed to Western audiences. In his writing, Tagore often uses the English term “religion” and the Sanskrit term dharma interchangeably. This article focuses on both key terms and on the question whether they may be seen as equivalent according to him. To answer this question one needs to consider their etymological meanings but also Tagore’s concepts of the so called “Man the Eternal” and “Divinity in Man”.