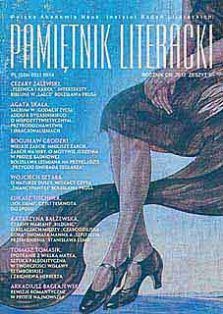 Summary/Abstract: The article aims at analyzing the function that Biblical quotations perform in Bolesław Prus’ “The Doll (Lalka).” In the first part the author examines the prefigurative potential of the signalled quotations which demarcate the lot of many minor characters (e.g. the Wysocki brothers, baron and baroness Krzeszowscy). The second part discusses so called “acts of quoting” in which intertextual relations are cut down to the scenes the quotations appear (e.g. the walk in Powiśle, the events in Skierniewice). In both cases the “Bible” as well as the theological discourse that interprets it prove to be a functional tool for understanding a number of unclear fragments in Prus’ masterpiece.